Sensei Hiroshi Ota is a karate-do instructor at Keio University in Japan, and he met Sato Sensei about eight years ago in India, when he was the national team coach for the Bangladeshi karate team.

This past summer, Sensei Sato invited Sensei Ota to come to Vancouver to give kumite workshops.  Last Tuesday, December 16, 2014, Sensei Ota was at Hombu in Vancouver, after which he gave workshops in Courtenay and Pemberton.

The workshop at Hombu emphasized basics in a kumite context.  Sensei Ota was affable and had quite the sense of fun.  I suspect he found us amusing in our earnestness:  he kept asking us to slow down our counts, so that we may “enjoy” the techniques.

Last week, on June 16, Robert Sheng, the oldest member in our association, passed away.  He had just turned... read more

What does karate-do training get you?

For the next time you get ready for our beach karate-do practice, here are the tips we'd emailed before... read more

A couple of weeks ago, Sato Sensei visited Shawinigan for a workshop and testing. Longtime students and friends,... read more

The three months or so before every Sato Cup are always a buzz of activity, culminating in the weeks,... read more

Last Friday, in the spirit of bushido ecumenism, Hombu hosted a seminar in the basics of aikido. Below... read more 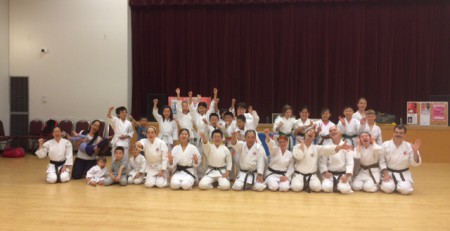 Megan Menzel from the Pemberton dojo came to town to do a class at Hombu yesterday. read more