A performance by our own Viki W., accompanied by The Lonesome Town Painters. read more

It was the forty-fifth time Sensei had done the winter beach practice and I did not know what to... read more 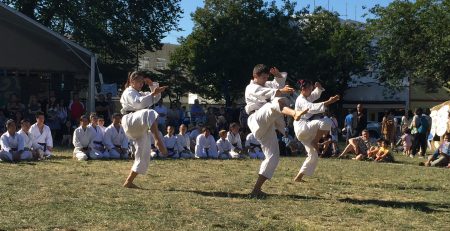 No Rest For the Wicked…Even on a Holiday Weekend, Part 2, aka the Powell Street Festival

This past Saturday and Sunday was the 40th Powell Street Festival, Vancouver's celebration of our local homegrown Japanese community... read more

Hello! Our annual invitational tournament is Saturday, November 12, 2016, at the BCIT Sportplex. Want to register?  Go to www.shitoryu.net -... read more

Looking at this photo taken by a kind spectator from an apartment overlooking our practice on Saturday at English... read more

The three months or so before every Sato Cup are always a buzz of activity, culminating in the weeks,... read more

February 25 was Pink Shirt Day in BC. In 2007 a Ninth Grade male student in Canada arrived on the... read more