Q  When did you come to Canada?

A   I came to Canada in May 1970. A friend of mine wanted to go to the Unitted States and I also wondered how to do this. In the meantime, local newspaper ads advertised the opportunity for immigration to Canada, as well as other countries such as Paraguay and Argentina. We went to Ginza, where the Canadian Embassy was located, to apply for Canadian immigration. It only took a year and we felt ourselves very lucky to be able to come to Canada.

Q   What was you first impression of Canada?

A   The mountains were beautiful, and the flowers and trees were all in color. This was in the middle of May. Imagine this, when coming from Tokyo. All the space, it was like a big park to me. I felt like I was in a dream.

Q   Why did you decide to stay?

A   I had only intended to stay for two years. When the time came to leave, I had already started a karate dojo. The people around me were quite upset when they heard that I might leave. I was a high school social studies teacher by profession and thought that this was what I was destined to do. At that time, there was a lot of enthusiasm surrounding karate and it became quite popular. With so much support around me for karate, I decided to dedicate myself full time.

Q   When was you first karate class in Canada/your first Dojo in Vancouver?

A   During my second day in Canada, I was training by myself in a Richmond park near #1 Road and Blundell. Kids came to talk to me and about twenty people asked me what I was doing. Three or four days later, while I was learning English as a second language at VCC, King Edward Annex at 25th & Oak St., about 15 students asked about karate. Phil Rankin, then Student Council President, was instrumental in getting approval to hold Karate classes. He had signed up 30 students; we could use the gym and had a budget for equipment. How could I refuse such a great offer?

Q   We no longer practice at that dojo. How many times have you moved?

A   The dojo then moved to the VCC Langara campus on 49th Avenue (1971). We had to move out of the Langara Campus because we had too many students. We were practicing outside in all kinds of weather. At the same time, I did a mail-out to all the community centres offering to teach karate. Only two  people replied, one from Steveston and one from Sunset. Steveston was too far to travel but Sunset was close to home. At Sunset Community Centre, the students were mostly children and we were involved there for about 10 years. We started classes at 12th and Arbutus but within 2 years we were asked to leave again.

We moved to the Peretz School on Ash Street, near Oakridge Mall location. We started the Dojo with 50 students (adults) and had classes 5 days a week. We stayed at this location from 1973 until our move to the Home Dojo on November 22, 1998.

Q   How, if at all, has karate changed for you since you first came to Canada?

A   My goals have changed and I began instructing karate full-time.  At the time, I had 50 – 60 adult students at every class. Karate was booming. There were only 3 other martial arts clubs.  The timing was perfect. Karate BC was formed 25 years ago, with only 320 members and 15 dojos. There are now thousands of members, and who can count the number of dojos?

Q   How do you see the future of karate?

A   Traditional karate is shrinking. People are looking towards more stylish martial arts, or fighting-style sports such as MMA. In the past, we have put too much emphasis on competition. We have neglected the tradition, the health development, the spiritual aspects and the meditation.  We have emphasized winning too much. Karate is not just a sport (tournament). Karate is about a broader range of training. I feel that competition is inside you. Winning comes from inside yourself.

Q   You have witnessed the growth of karate competition in Canada, Vancouver and the world. Have you noticed a significant change over the years? For example, is there more contact in kumite; has the caliber of kata changed?

A   I find that, in kata for example, the focus is more on performance rather than technique. This performance is often without understanding. In kumite, the contact views are different. Take the Europeans for instance, they have more light contact whereas the Americans have heavier contact. In Japan, where there is no contact, they wear a facemask. The rules of contact should be standardized.

Q   Are there any changes that you would like to see implemented in karate on a national and/or international level?

A   If you look at the Europeans, they have the opportunity to compete regularly since their countries are so close. The U.S.A. has the same situation. Canada, on the other hand, has little opportunity to compete. This places our competitors at a disadvantage. The more a person competes, the less nervous they become. The more experience in competing a person gets, the better they become. We are very insular in Canada. More competition is needed for those who enjoy Sport Karate.

Officials with World Level Licensing have more exposure and do better. The Kata World License is renewable every 2 years. This is a hardship sometimes for those wanting to stay licensed since it costs time and money to keep.

Q   What meaning does karate have in your life?

A   Karate is like my wife, my life! When I was attending the University of Tokyo, there was a shrine “Yasukuni Shinto Temple” next door. I used to visit there. One day. my English professor told me there were many young men resting there. Men dead from Kamikaze. They really wanted to live and have families, but had to make the sacrifice of their life for their country. He told me we were lucky to have been born later. He told me that I must do something very hard in my life, otherwise these young soldiers would have died for nothing. This was a big driving force for my commitment. I have been very lucky. I have a wonderful family and good people around me. I am not rich but I am very happy.

Q   And finally, the most important question to ask a Master; what is the true essence of Karate to you?

A   As an instructor, I feel that everyone should have a long and healthy life. This is most important. Encouraging our youth to maintain a healthy lifestyle. Understanding peaceful relationships. When you are physically and mentally strong, then you do not get into trouble. Seeing the true meaning of being. Karate is about making one’s mind and body strong so that you learn; peacefulness is the way. When reaching this level, one sees the true beauty in all things.

A true Master loves all human beings, old or young. He truly loves all human kind, animals, plants, nature, and all living things. He has a good heart and loving feelings. Every moment counts. Every master and teacher should create a peaceful atmosphere and encourage their students to establish healthy relationships. 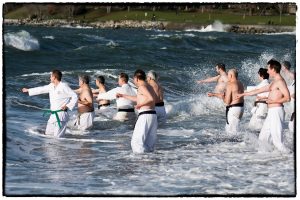 This was a memorable and fittingly challenging event with the arrival of the “kamikaze” (Japanese divine-wind). A welcome test of the spirit of all to defy the winds of 40 to 60 kph and wind chills below zero. The 1.2 metre waves made it a real soaker going into the sea. This 50th year event January 11, 2020 will go down in our history as the “Kamikaze Winter Beach Practice”.

This annual winter ritual was started by Sensei Sato 50 years ago to develop the spirit of his karate students.